When a small, skinny kid named Joseph Badal (218) entered the high-expectation halls of Central High School of Philadelphia in 1958, he felt it a shocking transition from the easy-going atmosphere of grammar school in Chestnut Hill. 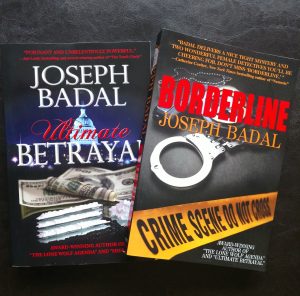 Q: Your first novel, “The Pythagorean Solution,” was published in 2003. How did that come about?
Badal: I had wanted to write my whole life. I grew up in a family where storytelling was a tradition…In 1999 I wrote my first book. I hired an editor, who took my 400-page manuscript and cut it down to 286 pages. He used a red pen and my poor manuscript looked as though he’d opened a vein and bled all over it.
The book was published and Joe, with his extensive background in business, understood how integral marketing and promotion were to the success of a novel.

Badal: You’ve got to go to bookstores and do signings. When my first book came out there was really no Amazon or social media. Now I’ve found that it’s much more productive spending an hour a day on social media, writing a blog, etc. I also do quite a bit of radio and TV and attend book club meetings.

Q: How does that work?:
Badal: I put the word out to book clubs that I would be happy to come and be a guest if they’ll read one of my books. That probably is the one marketing activity I love the most because, first of all, it gives you personal contact. Second of all, it gives you a chance to field some really good questions from people who have read your book.
Q: That doesn’t hurt your ego?
Badal: (Laugh) It’s very rare that anybody insults you. I get really good questions about why I did this or that. These are people who take their reading seriously. I’m not just there to get patted on the back. I’m there to get feedback. Often I say, thanks I’ll take that under consideration when I write my next book.
Q: You serve on several boards, including the board of a telephone company that serves the Navajo Nation?
Badal: Sacred Wind Communications. That’s the company that my brother John (220) is CEO and chairman of.
John was president of the Baby Bell that serves the western part of the U.S. when he retired. Then he saw this opportunity to serve a terribly under-served population. Before, if somebody got seriously ill on the reservation, they might die before they got to the hospital. They had no way to call emergency services. John saw a need, a humanitarian reason for doing this. In the process he turned this into a very successful business. He asked me to served on the board and I was happy to do so.
The other Badal brother who attended Central, Robert (224), is a retired lawyer/now consultant living in Santa Barbara, Calif.
Q: What does Joe do for fun?
Badal: Although writing is a job, it is an amazing amount of fun for me. I like to play golf, spend time with my children and grandchildren. Also, we have many fine writers in New Mexico, who I spend a lot of time with.
Before
After