A Central High School student’s class ring from 1931 will soon be making its way back to his alma mater after alumni archivist David Kahn (220) won an online auction Tuesday night to purchase the ring.

Kahn learned about the ring through a Facebook posting by 248’s Jim Junger, who learned about it through his regular pursuits of old Barnwell pins. The ring was listed by Alderfers Auction in Hatfield. How the auction house got the ring is unclear. Multiple calls to the business were not returned.

When Kahn saw the ring on the auction house’s website, he had no doubt that it was indeed authentic and he registered to bid on behalf of the Associated Alumni of Central High School.

“It clearly looks like a Central ring of that era” Kahn said. “It has the same style. It has the seal. It has the ring with the wording that was traditional. It has the class number (156) on the left shank and the graduation year on the right shank.”

There is no student name on the 14-karat gold ring, size 9, only the initials GCE engraved inside. “It shows wear and tear that would be associated with a ring that old, yet seems to be in very good condition,” Kahn said.

While waiting for the brief auction period to close this week, Kahn dug into the archives’ very neat folders of Central graduation programs and pulled out two copies of the June 1931 ceremony. Scanning the 192 names of graduates,  he could find no one with the corresponding initials.

Next he went to the shelves and pulled down a  156 yearbook.

The only student listed with the matching initials was George C. Ehmann Jr. Kahn looked back in the graduation program and found that Ehmann was listed there too, he had just overlooked him. 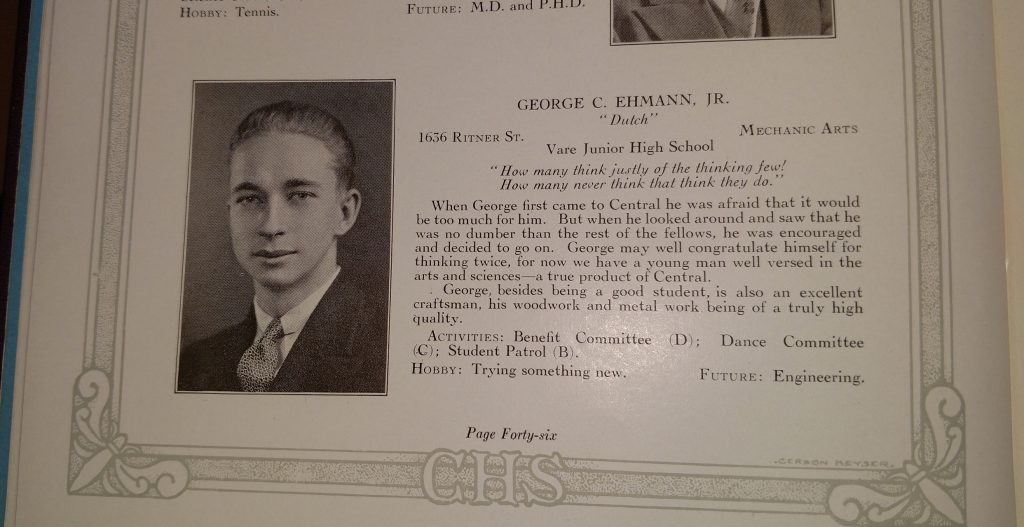 Meanwhile, Kahn won the auction for the ring with a bid of $200 and expects to have it in his possession by Friday. It will join a few other class rings in the archives and might possibly be the oldest.

“I think a lot of class rings were not common in that era because of the costs involved,” Kahn said. “This was during the Depression. Students didn’t have much money, so to be able to afford a ring was a  big deal.”

Not all of the rings that Kahn has come across have automatically become part of the  archives.  Some that he has found or that were sent to him he was actually able to send to relatives of their owners. Kahn himself plans to  donate his class ring to the archives “after my demise.”

The archives might make an exhibit of the class-ring collection, along with other jewelry such as Barnwell pins, prom keys and other fine pieces. Be sure to look in the window at Central’s library the next time you’re in the building. And if you’re especially proud of your class ring, email a few pictures, along with your name and  graduation information, to yd246@yahoo.com. We’ll put together a slideshow on this website when we get a bunch.